I decided I was going to go out of my comfort zone today with my card and tried for something different. I was surfing the net for card sketches that I could play with and came across Jen del Muro's blog. She is a pretty amazing artist. I found an old post of hers with a pretty neat sketch. Here is the sketch. 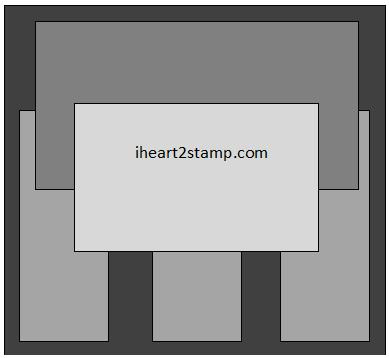 I used paper from DCWV asian paper line. I used stamping bella's stamps, Close to my Heart inks and I think it turned out pretty neat. I just have to "bling" it up a bit. 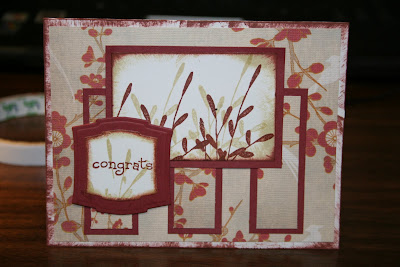 Today was almost like a fall day in October instead of a summer day in August. The sun was shining however it was overcast and cool. It pretty hard to believe that I was wearing a sweater today. It makes you wonder if next year it will be like this.

I have been going through my old paper and came across this beautiful paper by DCWV. It went really well with come Core'dinations card stock I had. For the stamp I used "underwatergoddess-abella". It turned out amazing.

I coloured her with copics and used chalk to creat the background around the bella stamp. She looks amazing. 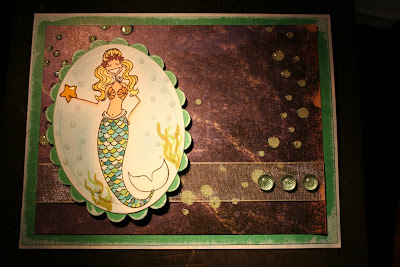 Here is the close-up of the mermaid. You will notice that I also added some seaweed. It certainly isn't the best but it looks good. 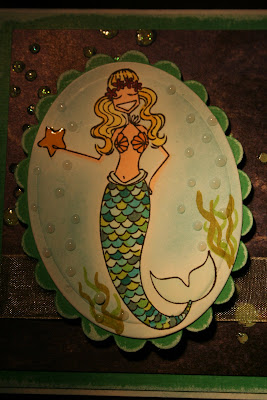 I got up pretty early today so I decided I would make lavender shortbread. I had seen the recipe in a magazine and had mentioned that I would like to try it. Well I was lucky enough to find a lady at the Baysville Farmers market that was selling bundles, so i picked one up.

As you can imagine the response from the family was not the best - ranging from eww gross to i am not putting that in my mouth!.

So at 9am i started my oddessy into lavender shortbread. Well an hour later i was still picking off the dried little flowers. OMG!! it was awful. I tried not to get any leaves or dried stem in the mix - well let me tell you I will probably never make this again!! After my hour of picking out flowers I finally had the 3tbsp's i needed for the recipe - and yes after all that pain, sweat and time - it was only for 3tbsp.

Well mixed the dough, and it smelled pretty good now considering I had lavender everywhere - and when i say everywhere I mean it!! That stuff is gross. However, I was very calm thoughout the entire process. It must have been from the smell.

So I rolled up the dough and let it chill while I got ready to go out with Carrie.

I finished the cookies by baking them. It smelled great. They weren't too bad - they were very different from your normal sort of cookies.

I went to Bellaland again to take a class with Paulabella on pencil crayons. I am definately more of a copic fan. Although I still work a bit with pencils.

It was a great day overall. When i got home my sister told me that my mom and tried my shortbread (and she was the one who didn't want to in the first place) and she actually liked it.

It was a great feeling.
Posted by Alexis Crossland-Smith at 10:09 PM 1 comment:

I was in Bellaland today to take a class with one of the bella's herself - Lindabella. She it truly an amazing artist.

Today's class was focused on Copic Markers - these are a great tool for card making!! They create absolutely beautiful images.

We did three cards today using bella's stamps. Gail, Carol and Carrie came. We all sat together to do the cards which was great as I had not seen Gail for quite some time.

Let's hear it for our newest copic fan - CARRIE!!! - she came to class excited to learn and very enthusiastic. She was new to copics and wanted to check them out - she is now part of the copic craze!!

If you want some more information on Copic Markers check out their website.

Here are the cards we did.

Thank you very much Lindabella!! The class was amazing.

So after I got home Fran, Colleen, Mom, Kaelyn and I decided to have a girls night and went to see Julie & Julia. It was great. It was kinda weird that Stanley Tucci played Meryl Streep's husband in the movie, it took me a few minutes to get use to, but it was absolute hilarious. The movie was extremely well done.

It was a great girls night out.
Posted by Alexis Crossland-Smith at 10:05 PM 1 comment:

So we were very fourtunate yesterday that we didn't get hit with the worst weather. We got hard rain but that was about all. The worst of the rain came after we pulled into our driveway after I had got picked up. It was like some turned on a faucet and let it run. We had to wait in the van until it slowed down a bit.

Vaughan seemed to get the worst of it. Luckily I was able to go to my appointment at the gym - it was great as we started circut training! It was very hard but as I got into it it got better! The sky was awful when I started but an hour later there was the most beautiful sunset I have seen - it only sucks that I didn't have a camera on me! The colours were so vibrant with the yellows, reds and purples. It was a sunset that took a few minutes to enjoy. Absolutetly stunning.

After I got home I worked on some more house mouse images for my sisters doortags. Overall, it was a pretty great day but we were very lucky in our area
Posted by Alexis Crossland-Smith at 10:03 PM 1 comment:

Went out to water the gardens this morning and noticed that we had some huge bumble bees drinking the necter and rubbing themselves in the pollen on our rose of sharon tree. So I ran into the house and got my camera. It was great fun trying to catch the bumble bee in flight. I got two really great shots. 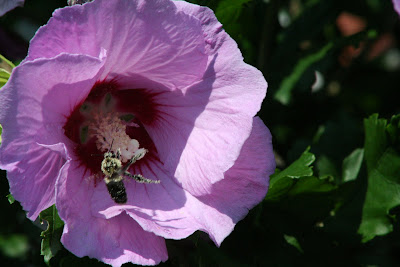 I loved watching these guys - it was quite funny watching the bees flit to and from the flowers rolling around in the pollen and making funny bee noises. 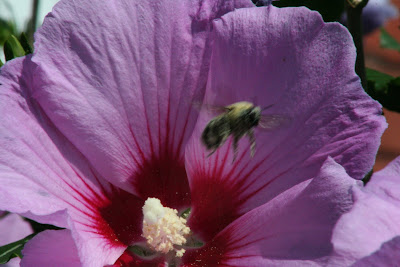 Posted by Alexis Crossland-Smith at 10:10 PM No comments:

At the cottage I was sitting in the sun room and all of a sudden saw this duck start coming up from the water.

It was weird as the ducks don't usually come up to the cottage. Luckily I got my camera and got this really good shot. 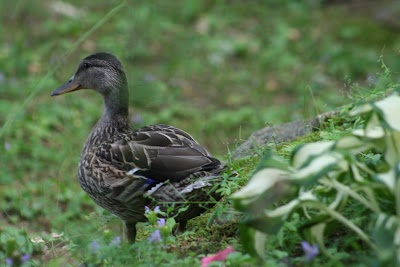 Posted by Alexis Crossland-Smith at 8:53 PM No comments:

Had a great time at the cottage spent all day Thursday, Friday and Saturday. I did some sun tanning and beading. I made my mom the necklace she wanted that was in silvers and burgandy. It turned out awesome.

I will upload the picture once I have pried the necklace away from my mom. LOL.

I saw the bluejay and got this really awesome photo as he was leaving a branch. I was pretty lucky to get this shot as he was extremely fast. 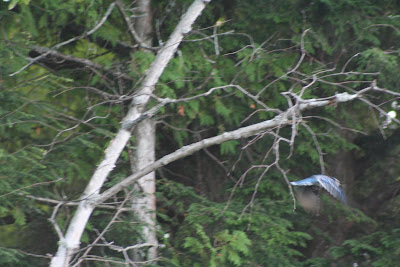 Posted by Alexis Crossland-Smith at 8:01 PM No comments:

Elaine had a few friends over to celebrate her birthday. It was really great to see some friends and to meet some new ones.

The party was hosted at Elaine's home. It is beautiful. We had a great dinner and an amazing cake.
Posted by Alexis Crossland-Smith at 2:49 PM No comments:

Today was the birthday party for Poppa Joe's 80th. It was a grand affair. The party was held at my neighbour's home - Fran. Oh my gosh - there was so much food. Fran had put together meatballs, sausage on a stick and lamb on a stick.

As my present for Poppa Joe - I made his birthday cake.

I made a cake cut with strawberries and covered in buttercream icing. On top of that i used fondant. I put on grapes done in two different colours. I also made drapes on the top part of the cake. 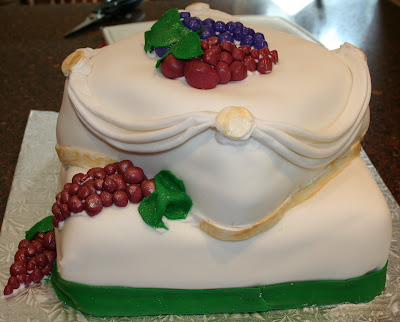 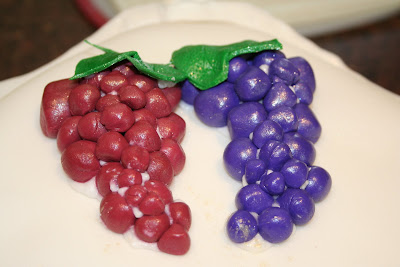